SXSW recap – AI and the Democratization of Work

Update: The Houston Chronicle wrote a recap of the panel on April 1. 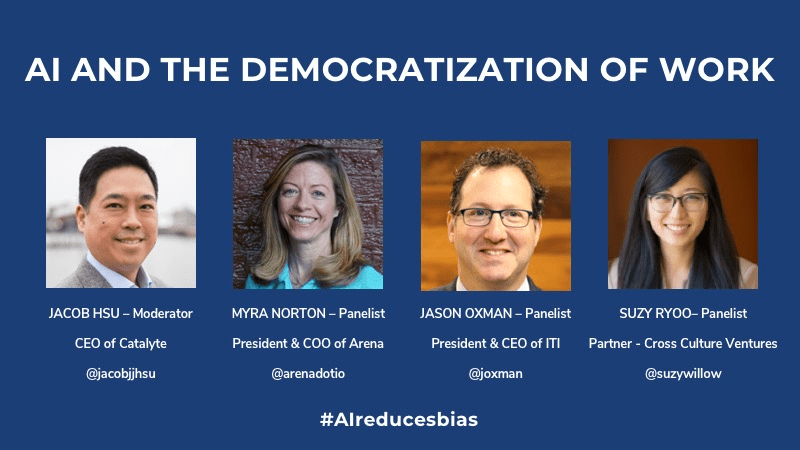 In front of a packed house, the panelists dove into the tricky question of how companies and governments can use artificial intelligence and data science not to displace workers, but create a more inclusive and productive workforce. The standing room only crowd stuck around to ask them additional questions on how to ensure bias-free data and the criteria for greatness in software development.

You can relive the discussion through this series of tweets live from the event.

What #SXSW19 session are you still thinking about? For me, it’s “AI and Democritization of Work” #HRTech Myra Norton @arenadotio @suzywillow @joxman Catalyte in Bmore. #futureofwork is exciting-the talented will access opportunity, no matter life circumstances

“Yes machines are biased, because they are created by biased people.” @joxman at the panel #ai and the democratization of work #sxsw19 hosted by @jacobjjhsu

We’re here at #SXSW with @arenadotio @ITI_TechTweets & @CrossCultureVC discussing how the power of #AI can be a force for good and how #AIreducesbias in the workforce! pic.twitter.com/OixTOQkaRa

“Talent is equally distributed, but opportunity is not, and data can help us navigate away from unconscious biases.” – Myra Norton from @arenadotio #SXSW #AIreducesbias

“At @ITI_TechTweets, we represent clients with hundreds of employees and several are deploying #AI software solutions to avoid biases in the hiring process, and I think it’s something we’re going to see a lot more of very soon.” – @joxman pic.twitter.com/OZJ3BAAvfl

“At @ITI_TechTweets, we represent clients with hundreds of employees and several are deploying #AI software solutions to avoid biases in the hiring process, and I think it’s something we’re going to see a lot more of very soon.” – @joxman pic.twitter.com/OZJ3BAAvfl

“In DC specifically, #AI can help eliminate unconscious biases for candidates with criminal records. When AI can help sift through a diverse pool of future employers in a fair way, I think we will see an enormous shift in the hiring processl” –@joxman #SXSW #AIreducesbias pic.twitter.com/7BpzkGvwhG

Q & A is going on right now! #SXSW #AIreducesbias pic.twitter.com/6NpyoxJpzf

“5-15% of candidates score high enough on our assessment to enter the Catalyte training process, but that same 5-15% never thought they would have a chance to be a software developer, but they made it. It all starts with realizing you have the potential.” @jacobjjhsu #SXSW pic.twitter.com/CGo0COdoZm

“At Catalyte, when you take the assessment, we’re watching your keystrokes, your web browsers, and how you take the test. We’re focusing on your cognitive agility. Someone who gets half of the questions wrong can still make it through to our training program.” @jacobjjhsu #SWSX

“What you have to look at are the measurements of success, and you have to make sure those don’t have biases incorporated. The core problem is trying to define excellence and then measure it in a fair way”- @jacobjjhsu and Myra from @arenadotio. #SXSW #AIreducesbias